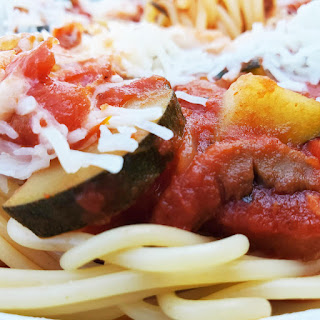 There are just days when not one single new recipe sounds tempting, days when all table counterparts are too tired to cook, too tired to eat, and too tired to try new foods, days when comfort foods are needed.  What is this tables' ultimate comfort food: spaghetti.  Plain white noodles with garlic and herb jar sauce.  Having fresh veggies in the fridge and not wanting to make a salad, Fresh & Easy Veggie Spaghetti was made instead.
Recipe:
In a large pot, one small onion was diced and cooked until translucent.  To onion, one diced zucchini, half carton of sliced bella cap mushrooms, one tablespoon of minced garlic, one teaspoon of dried oregano and basil were added and allowed to simmer on low until zucchini was tender.
Scaled for Likability:
Normally, if vegetables are going to be added to jar spaghetti sauce it is spinach, mushrooms, and sometimes a small jar of black olives.  Never zucchini.  Why?  Because just as I suspected but never put to test, the vegetable cooks down into the sauce causing the sauce to be watery.  Nothing worse than watery spaghetti sauce.  To offset the extra water, next time one tablespoon of tomato paste will be added to the jar sauce while simmering and the seed portion of the zucchini will be omitted.  Otherwise, the zucchini was a nice change to spinach.