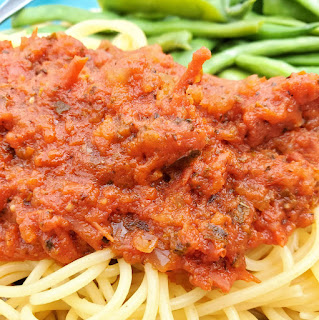 From a garden full of stink bug bitten and bird pecked tomatoes one has to decide what to do with the produce.  They are not "pretty" to give away and too plenty to toss.  The skins are ruined from the bugs making them tough to eat and the reddest brightest are pecked by the birds.  What to do, what to do.  Spaghetti sauce, that's what to do.  No, they are not the best tomatoes for sauce but with enough cook time and a slight alteration to standard recipes, I am confident this will work.
Many recipes were consulted but done were actually followed.  In a large dutch oven, one small diced white onion and two diced garlic were softened in one tablespoon of olive oil.  Tomatoes (about a gallon bags worth) were washed and quartered and added to pot along with one teaspoon of rosemary, basil, oregano.  Sugar was called for in the majority of recipes but was omitted as sweet tomato sauces are gross.  Salt and pepper were added and the sauce was cooked until a thick consistency was reached.
Scaled for Likability: No, Thank You
It wasn't a fail as it was consumable but leftovers were tossed to the chickens.  The sauce was bitter and mealy in texture.  Back to the drawing table and more research.  There are just too many tomatoes to waste.