Stir Fry with a Glaze? 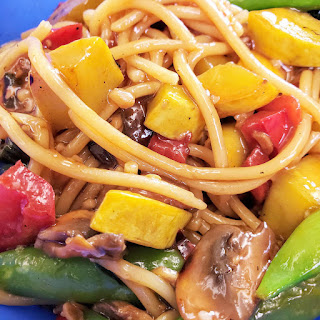 Modifications Made:
I am sure by now you are aware of my strife with Americanized Asian foods and their sweet sauces.  The WHOLE reason this recipe was made was because the author discusses sweet foods and that this recipe was sweet without being "cloying".  Well, with that kind of recommendation and having really only one tablespoon of sugar for the glaze and a quarter cup for the sauce, the sugar was not omitted or altered.  Strange, I know!  Fret not as plenty of other modifications were made.

Sauce: was made using reduced salt chicken stock and mirin instead of shaoxing wine.  One tablespoon of sambal oelek was added to offset the chili peppers in the stir fry itself.

Stir Fry:  Garlic was increased to six gloves, finely chopped.  (On a side note, I need to do a whole post about fresh garlic vs pre-chopped.  Gonna do that soon.)  Ginger was chopped not grated.  Between the mushrooms and the snap peas there should have been five and cups of veggies.  Table counterparts are not mushrooms fans like myself.  Baby bella mushrooms and sugar snap peas are both sold in eight ounce packages. With the addition of one small red and yellow pepper the veggies still did not equal to the required five cups so some leftover spaghetti noodles were added.

Scaled for Likability: Good
Wait for it... It was too sweet.  Other than the sweetness this was the moist well covered stir fry to date.  Liking the stickiness of the sauce, the next time this is cooked to offset the sweetness of the dish, less sweet vegetables (broccoli/snap peas/carrots/baby corn/zucchini) will be used and a little more heat will be added. As with all stir fries, veggies must be fresh, not frozen or slightly soft.  The yellow bell peppers were softer in texture than the red only due to the produce being slightly older than the red.  Not having the noodles would have meant plenty of sauce to cover rice when veggies were placed atop.  If this is not your thing, then less sauce or more veggies should be cooked.