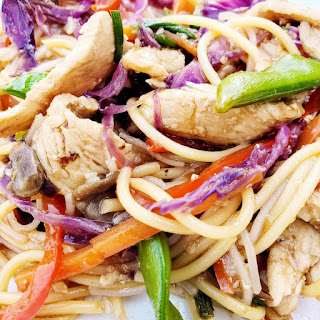 First things first.  ReNEWdled Lo Mein is a not a typo but a play on words.  It is the combination of renew noodle lo mein.  Re-NEW-dled.
Black is black, white is white.  Don't judge a book by the cover or a recipe by the title.  What you see is what you get.  Those any many more cliches exist for a reason.  But sometimes they are not true.  Not true at all.  Black really is the combination of all colors and white is the lack of color.  This insanely long titled recipe The 30-Minute Ultimate Spicy Chicken Lo Mein really took closer to an hour to make and contained very little heat.  Very little heat.
Modifications Made:
Good grief, the list of veggies in this recipe were over the top.  Just to prepare the veggies would have taken close to thirty minutes, not to include cook time, or mix time.  Not wanting to julienne all the veggies nor wanting to wait an hour to eat, I used veggies already in the fridge ready to go.  The only two items needing chopping was one cup cabbage and one bell pepper.  Snap peas pre-washed in a bag, mushrooms from a can.
With thin spaghetti boiling in salted water, chicken was cooked as directed and set aside.  Veggies were added to the skillet, softened slightly, and set aside.  Sauce, doubled as it was an entire box of spaghetti, was quarter cup soy sauce, one tablespoon of sriracha/honey/oyster sauce/garlic each, and one teaspoon of sesame oil.  To this one tablespoon of cornstarch mixed in one tablespoon of water was mixed and heat turned off waiting for noodles to be done.  As soon as noodles were cooked, they were taken straight from the water quickly drained, added into the thick sauce and tossed about for even coating.  Chicken and veggies were added and tossed about in the sauce.
Scaled for Likability: No, Thank You
It was the cabbage's fault.  Red cabbage does not belong in a stir fry or lo mein.  It discolors the other ingredients and overpowers the sauce.  Cabbage for stir fry or lo mein should be limited to napa or tender green cabbage.  Not red.
If one picked out the cabbage and ate the rest, the lo mein was okay.  The sauce was good but the noodles were wrong.  They needed to be cold leftover noodles that have gone slightly dry.  Veggies on the other hand had a nice texture combination.  Snap peas with high crunch, red peppers with soft crunch, and tender mushrooms.  Green, red, and white.  Lovely.  If there was an "Ultimate" winner in this dish, it was the marinated chicken.  Never marinated a chicken before stir fry or lo mein and it was worth the extra five minutes wait time.  Chicken was flavorful and moist all on its own.
With most failed recipes there is plenty of room for improvement but why waste time when there are already a couple of T&T lo mein recipes saved.