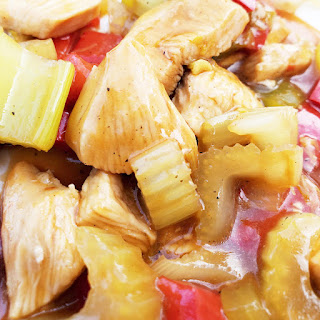 The elder table counterparts is full of euphemisms like "ticks on a dog", "R-U-N-N-O-F-T" from O Brother, Where Art Thou, and does the Pope wear a funny hat? just to name a few of the many hundreds.  Hundreds!  No, I am not exaggerating either. In reading Black Pepper Chicken my very first thought was "that's a spicy pickle!"  A stir fry with three different peppers and only three teaspoons of sugar had to be given a chance.  Even it was too spicy the pictures made it worth trying.
Modifications Made:
Marinade: The recipe did not state so low sodium chicken stock was used.  Granulated white sugar was used for the marinade and stir fry instead of palm sugar.Garlic was doubled.  One and half teaspoons of black pepper instead of one teaspoons to help offset the lacking peppercorns in the stir fry itself.
Stir Fry: Black pepper was increased by quarter teaspoon to offset omitted black peppercorns.
Scaled for Likability: Great
Oh, the debate over celery in stir fry.  I love it, the table counterparts don't saying celery is not Asian. Moist tender chicken, slightly snappy red bell peppers, and crunchy celery.  And yes, the sugar can have been reduced.  The bell pepper was sweet, the celery was sweet, and the chicken marinade soaked up plenty of sugary goodness that the additional sugar in the stir fry could have been omitted or at least lessened to say a teaspoon especially since there is also sugar in the oyster sauce.
Next time, celery will be replaced with bean sprouts, bamboo shoots, carrots, or snap peas.  Still offering a lovely crunch without the bold taste of celery.  Since black peppercorns will still not be used, a half teaspoon of white pepper will be added to the marinade.  So good!