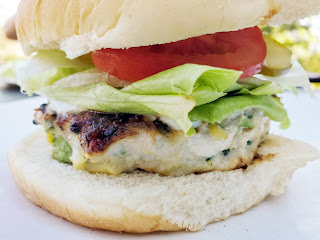 Ever the quest for a tasty burger continues. Not having a turkey burger since way back in November with Turkey Cheeseburger with Apple Relish which good but not great, a totally different tactic was taken today, a Spicy Turkey and Zucchini Burger.
Modifications Made:
Red onion was added to accent the greek flavoring of cilantro, mint, and tzatziki-ish dressing.. Cayenne pepper was omitted mostly because it is not a staple seasoning but it would have been good in the burger.  Not wanting the patty fall apart during cooking, the egg was omitted.
Scaled for Likability: Good
The instructions made small burgers or even sliders.  Not being a fan of sliders as that is just bread filling and not meaty goodness, small burgers were the choice burger of size.  A one pound package of turkey was divided into five small burgers.  As you can see, five patties were too small.  This recipe would have been better for quarter pound burgers or even third pound burgers.  The meat held together wonderfully and remained moist.  Zucchini reminded me of my childhood, seen but not heard.  Bits of green could be seen but not tasted.  For a nutritional addition, the boost was nice but it did not add  any flavoring.
Next time this burger is made, the patties will be made long and slender like a hot dog so the patty could be placed inside of a toasty pita pocket.  Plain jane white boring hamburger buns did not add to the texture or flavors of the burger.  Also, instead of lettuce leaves, shredded lettuce will be used alongside cold packed dill pickles instead of hamburger pickle slices.