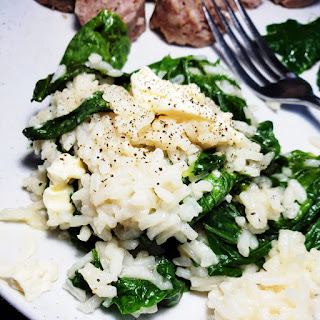 Way before the lock down was finalized and people went into food hoarding status, this table bought a 20 lb bag of rice.  Why, you ask?  Simply because I was tired of running out of rice.  Some tables eat pasta, others potatoes, others bread.  This table eats rice.  Breakfast rice (bean and cheese and rice tacos), lunch rice (tacos with rice, nachos with rice), dinner (porky rice, chicken and rice, stir fry and rice), and dessert (rice pudding).
One cup uncooked rice results in three cups cooked rice.  If served for dinner as a side, cooked rice nets less than a half cup of rice as leftovers.  With so many rice recipes twenty pounds should last about two and half months.  Better get cracking on new rice recipes like Garlic Butter Rice with Kale.
Modifications Made:
As to be expected, the cooking instructions were not followed.  Rice was cooked by itself as normal, no changes made.  Rice, water, salt, 15 minutes.  Kale was sauteed in a skillet over low heat with olive oil, butter, salt, and garlic while the rice cooked.  After rice was fluffed in bowl, it was added to garlicy kale along with one tablespoon of butter.  Mixture was tossed, tested for salt, tossed with pepper, and served.  Almonds were omitted as they did not align with pork sausage.
Scaled for Likability: Great
I have mentioned previously mustard greens, chard, kale, and spinach are used interchangeably at this table.  With this recipe, spinach would not be used as it too soft of a green and would not be able to hold up to the fluffing and mixing.  Nor would it stand alone in the mixture like the kale did.
Next time this side dish is made, kale would be diced not sliced, one small finely diced shallot onion would be browned before kale was cooked, and nutmeg and a dash of red pepper would be added to the kale while sauteing.  Nutmeg accents the kale, red pepper offers a nice heat to the buttered rice, and onion and garlic are like two peas in a pod.