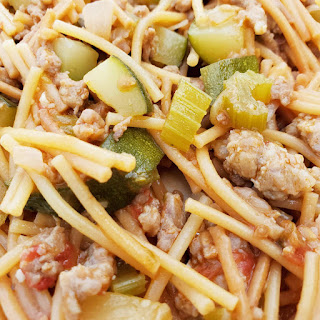 When the weather turns warm, all dinners become too hot to make, too hot to eat, just too hot to even warm up in the microwave.  Stews, soups, and warm winter meals are viewed with a longing that will be six to eight months away.  Oppressive heat does not stop the wish booking of warm winter meals.  While saving the link for Italian Sausage Soup I saw a sneak peak popup for Minestrone Soup.  Similar in ingredients, there was just enough differences to make them separate meals.  Not want to wait until winter, the AC was turned on in the kitchen and the two recipes were combined and modified into one.
Modifications Made:
The basis of the meal followed the Italian Sausage Soup with additions from the Minestrone Soup.  Not having orzo pasta, half box of thin spaghetti noodles were broke into two inch pieces and pan fried to a golden brown in a large dutch oven or pan with lid.  Noodles were removed, sausage was cooked and drained of fat, and set aside (not with the noodles).  To the residual sausage fat, one cup diced yellow onion, two tablespoons of minced garlic, and one cup of chopped celery were cooked until onions were transparent.  To veggies, sausage was returned along with one can of petite diced tomatoes, one medium diced zucchini, two cups of chicken broth, one teaspoon of oregano/marjoram/basil were added.  Mixture was allowed to cook until zucchini was almost cooked.  Noodles along with one cup of water was added to mixture, salt and pepper were adjusted, and mixture was cooked until noodles were done.  Water was added as needed.
Scaled for Likability: Great
During the cooking of the vegetables it occured to me to cook this recipe like Beef Fideo Delicioso instead of like a soup.  The only difference in the fideo would be the addition of vegetables to the meat and Italian seasoning instead of Mexican.  Worked like a charm.  This was an instant hit and declared an immediate T&T recipe, no further modifications needed.  However, carrots would have been great in this dish, there was just not any in the fridge to toss in during the celery cooking stage.