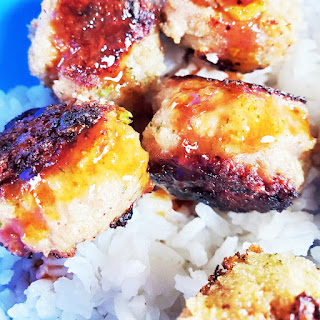 Yeah, a dinner other than noodles!  Table counterparts were wondering if the noodles were wrapping me into their tentacles and new limiting new dinner ideas. So many noodle options!
With the success of Dragon Noodles and Green Beans and wanting a dinner with meat, Turkey Sriracha Meatballs were selected tonight.  Still a simple dinner as the rice cooks while the meatballs fry and everything is done in about 30 minutes but it is not noodle and sauce simple dinner.
Modifications Made:
Other than the decrease of 19oz turkey to 16oz, the recipe was followed as written.
Scaled for Likability: Great
Let me get this straight, I am all for the removal of Freedom Units for the ease of Metric Units.  Don't even get me started on dry vs wet weight measurements!  Having a standard just makes sense.  It's not like there is not a standard measurement in place in the REST OF THE WORLD!!!  Literally, the rest of the world.  Nowhere else do freedom units exist.  If it was such a good thing, then maybe others would use it, right?
With that being said, recipes with odd amounts to "standard" freedom units makes cooking/baking difficult. Case in point 19oz of turkey?  Clearly not an freedom unit recipe as meat comes in pounds.  One pound tubes, one pound links, one pound packages.  What in the world am I gonna do with 13oz of left over ground turkey?  Yeah, no.  One pound.
Dragon Balls were even better than Dragon Noodles. Unlike Dragon Noodles, Dragon Balls has just enough sugar to be both sweet and spicy where as the Dragon Noodles were simply just spicy.  The extra sauce from the meatballs was ladled over the rice resulting in Dragon Rice.  Slightly sweet, very spicy, and so good.
Immediately upon eating these were deemed to be added to the T&T collection by the teen counterpart (score).  Therefore, the next time these are made (next week maybe) the meatballs will be doubled.  When served just as meatballs and rice, there were not enough meatballs leftover for lunch tomorrow for everyone.  Too bad table counterparts, you can have sandwiches, I am having Dragon Balls!