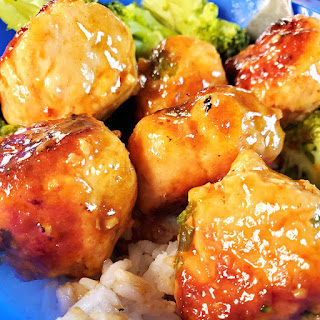 Take out Chinese food growing up consisted of a handful of meals: almond/cashew/lemon chicken, sweet and sour chicken/pork, moo goo gai pan, beef and broccoli with carrots, and hot and sour soup with fried rice and egg rolls.  Never once did the meals consist of spicy plates such as General Tso Chicken, Hunan Beef, or Sichuan Pork.  Having a new found affentiny for meatballs and Asian foods, General Tso Chicken Meatballs were given ago. Besides, if I thought the sauce too spicy, I could temper to tastes.
Modifications Made:
Sauce: Not having teriyaki sauce, a homemade  Teriyaki Sauce was quickly made and allowed to simmer and set while meatballs were made. Sauce ingredients were doubled and the use of chili sauce instead of chili flake was the only modification.
Meatballs: To one pound of ground chicken, one teaspoon of ginger, one teaspoon of chili sauce, one teaspoon of minced garlic, and two stems of finely diced green onion were mixed.  Meat mixture was then placed back into fridge to firm up making formation of meatballs easier and without the need of breadcrumbs or eggs.  Once properly chilled (about 30 minutes), meatballs were formed at about one tablespoon and pan fried in a cast iron skillet with a splash of vegetable oil.  After being cooked on both sides, teriyaki sauce was added until meatballs just covered, not drowning.
Scaled for Likability: Great
Not to brag or anything, but this is one of the few meals where I feel my version and pictures are better than the original post.  Next time these meatballs are made, the recipe will be doubled as leftovers were amazing, chili flakes along with the chili sauce will be added to the sauce for more heat, and meatballs will be made slightly smaller to allow for bitesize explosions of taste.