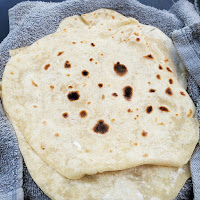 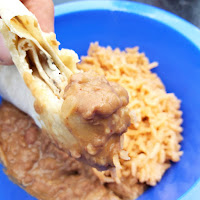 Favorites.  Favorites are stupid as nobody has an absolute favorite of anything.  Especially when people start down the narrow roads of favoritism.  With that my favorite food is Mexican.  My favorite Mexican dish on the other hand will depend on the day, the location, the restaurant, the company, the weather, the sun and moon alignment to each other.  Get my point, right?  How can I compare plain-o-jane-o cheese enchiladas to green chicken enchiladas, simple cheese nachos to nachos grande, or debate corn vs flour tortillas or refried, pinto, or charro beans.  They all have a special place.
Having had a debate of homemade flour tortillas to store bought uncooked flour tortillas with my aunt I decided to prove my point that there is nothing better than homemade tortillas.  Nothing.  When looking for my favorite flour tortilla recipe I stumbled across Flour and Potato Tortillas and new these had to be made instead.  To eat flour tortillas by themselves seems childish so Easy Refried Beans were made, too.  Bean and tortillas.  Tortillas and beans.  A matched made for perfection.
Modifications Made:
Tortillas: Every other flour tortilla (or Chinese pancake) says the longer the dough rests the better.  Dough rested for about an hour instead of the stated 10 minutes.
Refried Beans: Written as followed but found water was needed to create thickness desired.  Wanted almost a creamy texture in beans not a wall plaster consistency.
Scaled for Likability:
Tortillas: GREAT!
This recipe starts off with such a simple statement " I love fresh flour tortilla, whether they're homemade or purchased from one of the local tortilla shops.  But tortillas on day two are never as good.  Either they get brittle or rubbery.  But they never stay nicely flexible.  These do."  Oh my chewy goodness no truer statement has ever been said in regards to the state of homemade tortillas.  So good straight off the griddle with butter, beans, cheese, guacamole, sour cream, nothing.  A few hours later Frisbees.  I cannot attest to the few hours later test much less the next day test as there were none left.  NONE!  Potato flakes, who knew?

Homemade refried beans have been made numerous times over the years.  Heaping tablespoon of bacon grease in a skillet, add drained pinto bean, one teaspoon of chili powder, half teaspoon of comino, salt and pepper to taste and mash with spoon while stirring in water by the tablespoon to desired consistency.  Easy peasy.

In this recipe fresh onion and garlic was sauteed before adding beans and seasonings.  Cannot say the onions and garlic added a layer of flavor to the beans that powder wouldn't have offered.  What I can say is the bacon grease was clearly missed but the lime juice was nice touch.